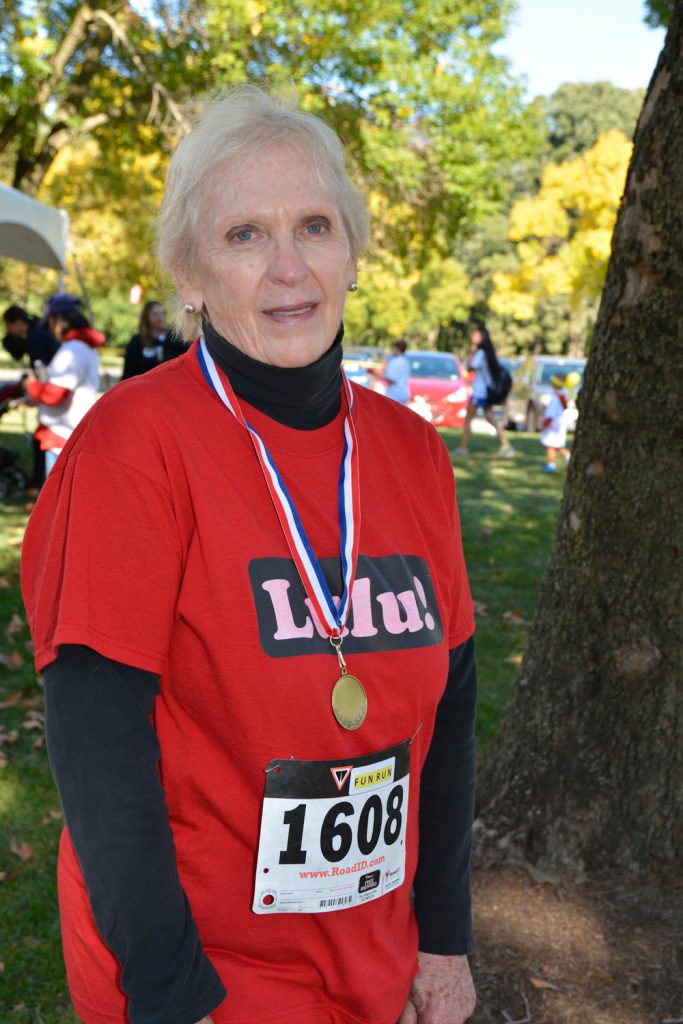 My name is Linda Hoff Woodruff. Having been reared in the South, I married into Princeton, NJ after college. That was in 1962, and yes, I am ancient.

I have four wonderful children and their spouses and eleven fantastic grandchildren. They and my close friends call me “LuLu.”

I was diagnosed with Parkinson’s disease in 1998. I had noticed a slight tremor in my right hand now and then, mostly in social situations. My physician noticed too and sent me to a specialist who made the diagnosis, Parkinson’s. On a friend’s recommendation, I made an appointment with my present Neurologist … It has been a long and positive relationship.

The Parkinson’s has progressed very slowly. I have good days when I don’t notice it at all and bad days when my balance is off, and I sway. I do what I call the Parkinson’s shuffle and on occasion have been known to trip and take a spill.

What is Your Advice to Newly Diagnosed Parkinson’s patients?
At one of The Parkinson Alliance races, a doctor at one of the tents told me exercise is just as important as any drug. My Neurologist agrees that it is important with a capital I.

So, I take two tai chi classes a week and a strength and flexibility class. I play bocce on a regular bocce team, and contrary to what I used to think, bocce is not just for old people, though I would certainly qualify if that were the case. I try to get to the gym at least twice a week to use the stationary bike and the rowing machine. I just read an article about boxing and Parkinson’s, and I’m intrigued … that’s next on my list.

What Are You Most Proud of?
My kids … they are wonderful adults, super parents and dote on their mother to a fault. At times, they make me feel ten years old, and I have to remind them that I’m the parent, though I have to admit that I’d be lost without them … they are my lifeline.

Both of my daughters are very involved in their community. I see the trickledown effect in their children who have begun to volunteer and give time to various organizations especially those involving young people. And they are really enjoying it … It bodes well for the future.

In 2000, the girls started a team, “For the Love of LuLu,” for The Parkinson Alliance Carnegie Center 5K and Fun Run — we’ve had an entry every year since. In fact, in 2014 our team was presented with the King Award. I was truly taken by surprise. It was such an honor, and I was so proud.

What Lights You Up?
Besides a dirty martini? … Seriously, my grandkids. Unfortunately, I have a better rapport with the five boys who live nearby; the other six live on Martha’s Vineyard. We have great summer visits there; the kids are always ready to hold my hand for our walks in the sand … a must on those days when my balance goes awry. I’ve been leading the local five a bit astray, teaching them crazy poems and old college songs. I want them to remember their LuLu with smiles on their faces.

What Turns You Off?
People who are unwilling to give it a go. Those of us with Parkinson’s have such problems with movement, some much more severe than others. It is so important to remain positive and to continue to push yourself to keep moving whether it’s trying to vocalize the lyrics of a song or move your feet from a frozen stance. The good feelings that come from trying, whether we succeed or not, create an elixir that keeps you going and growing..

What Is Your Favorite Word?
I have two…serendipitous and ubiquitous.

Serendipitous is such fun; I love the way it rolls off your tongue. My life has been exciting, never a dull moment. I have had two marriages, both great love matches. The first began with a blind date in college, the second, a glance across the room at a family reunion, an invitation to go fishing and I’ve never been quite sure who caught whom.

Life is serendipitous… love is truly ubiquitous…and, I am blessed!

What Are Your Least Favorite Words?
No, Never and Impossible.