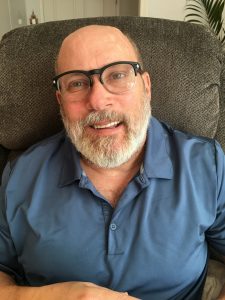 Mike Weinman is an accomplished executive (more than 20 years in finance and operations), a dedicated “doer,” (Treasurer and longtime Board member of the Parkinson’s Community of Los Angeles); and compassionate connector (Young Onset support group leader).  Similarly, Nessa, his energetic wife, is equally involved, running a support group, and raising money through the LA Marathon.

When did you first learn of The Parkinson Alliance?
I’ve participated in the Alliance’s research surveys for about 10 years; they are an important contribution. But I first met Carol Walton about 5-6 years ago. She is an impressive lady and both she and the Alliance are a fantastic resource for the community.

What is the one thing that you would like every person just diagnosed with PD to know?
I was diagnosed in 2000 when I was 36. If there’s one thing I’ve learned, is that attitude is important.  And that you have to fight. Fight for everything to keep yourself well and the symptoms at bay— from exercise to diet to sleep. Don’t give in until you have to, until the PD symptoms require a different approach.  And when you have to, accept it and move on. But fight and don’t give in until you have to.

Do you exercise?
Absolutely. I box and do yoga twice a week. It’s a Boxing for Parkinson’s class and it’s a hard workout!  I also go to physical therapy once a week.

What or who inspires you?
John Ball inspires me because he’s had Parkinson’s for 30 years, and he’s still running, doing what he can.  Him and all the other people with Parkinson’s just getting through their day.

What do you dislike?
People who draw conclusions when they see you and don’t know your situation… make comments… like Oh, is he drunk? Things like that… Most people are very nice, but you do get the occasional thoughtless person…

What are you most proud of?
It might sound crazy, but in 2010, I did a 3-day weekend with the Boulder Outdoor Survival School. Just a group of guys and a guide, living off the land, making fire, catching fish, eating berries, purifying our own water.  I felt that if I could do that, having Parkinson’s for 10 years or more, I could do anything. It was very empowering, and Nessa was really impressed!

What’s the one thing that you wish more people knew about Parkinson’s?
They think of Parkinson’s as tremor, but there’s so much more to it than that. People don’t get the frozen face. And all the non-movement related issues that you have to deal with…They don’t understand the slowness… they just think about tremor. I wish more people knew the full range of what we cope with.