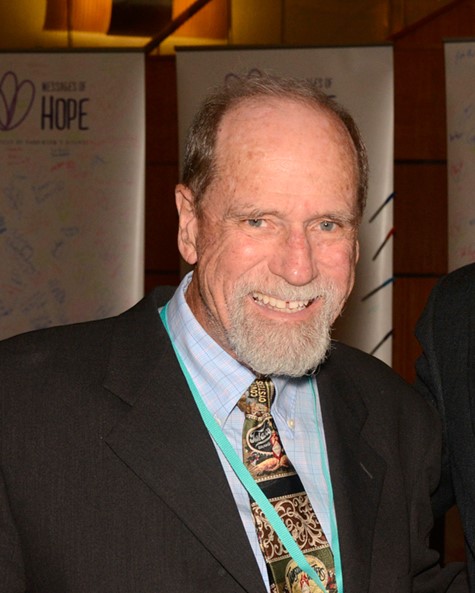 For John Ball, it was a series of vague symptoms—poor sleep, loss of sense of smell, vivid dreams, cramping in his left foot and a general slowing down—that sent this lifelong runner on a search for a diagnosis.  It would take 12 years before he would be told he had Parkinson’s—at the age of 39. That was before they called it “Young Onset.”

Sinemet allowed John Ball to begin running again and he has never stopped. He has since completed 25 marathons and one 50K ultra marathon, becoming a legend in both the running and Parkinson’s communities.  Now 73, he’s still running, but a wonky back focuses him on half marathons. Over the years, John and his wife Edna, started Team Parkinson to organize runners to raise money through the LA Marathon, funding nearly $3 million to date. In his spare time, John has authored two books, War Torn and Living Well, Running Hard, to tell his story.  Here is John Ball, in his own words:

What advice would you have for someone newly diagnosed?
“Anyone just diagnosed should know that its not a downward death spiral.  You can recover many of the things you’ve lost. You can build back a lot of the things you’ve had to give up over the years.  A lot of people get diagnosed in their 50s and 60s, in middle age when they’ve already given up on their bodies over time.  They’ve given up on different aspects of their strength, their fitness, their attitude and expectations from life as they’ve gotten older.

Everything is recoverable.  You may have to work harder. You may not get it back to the same degree.  But you will get it back. People give up on themselves much too easily. You can get it back if you’re willing to work hard.”

What inspires you?
“Every time I go to a support group, I learn as much from them as they do from me.  For the first 10 years after I got diagnosed, I just had my head down.  I had a life to live, a family to raise, and a job to keep.  I wasn’t connected to the community at all. I was just trying to get through life. Discovering that there was a community that could be served, that there was something that I could give was a real eye opener and inspiration.”

What lights you up?
“I love to see someone accomplish something that they didn’t think they could. I’ve seen people set a goal through running, working hard, and knocking it out of the park.  I love that.”

What are you most proud of?
“I’m most proud of the fact that we’ve had more than 25 people with Parkinson’s finish the LA Marathon.  We’ve had some great years of fundraising and the $3 million we’ve raised is tremendously important, don’t get me wrong.  But to see people able to set goals for themselves and achieve something that they didn’t think they could, that makes me proud.  Giving people a target gives them something to aim for and we all feel tremendous satisfaction when they meet their goal.”

What is your favorite saying?
“Can’t make a difference if you don’t show up.”