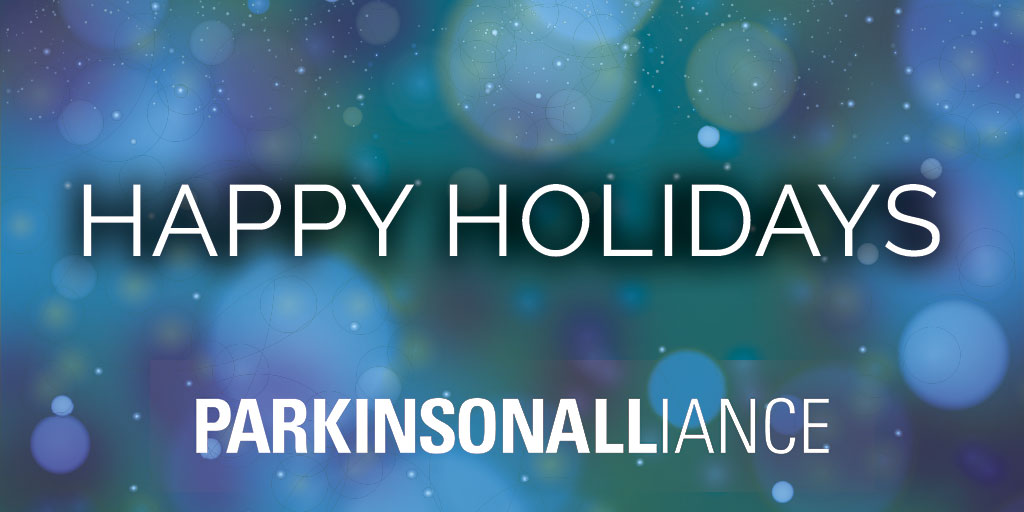 December is the time to gather with friends and family and celebrate the holiday season. At The Parkinson Alliance, this December also marks the one year passing of our beloved co-founder, Margaret. As we look back on this year, we take pride in having carried on Margaret’s goals for the Alliance.

Margaret devoted herself to educating the Parkinson’s community about anything that may improve the quality of life and to raising money to fund Parkinson’s research. These core principles remain at the heart of The Parkinson Alliance. Under the leadership of our President and CEO, Carol Walton, the Alliance continued participating in educational seminars and area events to empower the community, growing the number of participants in our patient-centered research, and working on various Team Parkinson events to raise money for research.

This year we completed and published two reports: (1) Non-Motor Symptoms of Parkinson’s Disease; and (2) Dyskinesia, Off-States and Parkinson’s Disease. We hear over and over how our reports help validate and support the individual’s experience and help bridge the gap between patients and their care providers. These reports, as well as all of the reports we have published, are from the patient’s point of view and available for you to read at no cost.  You can see a complete listing of all of our reports here.

We also funded research grants, including a pilot study expansion study to help clarify the relationship between walking and talking and to develop new dual- and multi-task interventions to directly benefit Parkinson’s patients. We also funded a project that assesses the degrees to which stimulation frequency parameters in deep brain stimulation affect gait. You can read more about these grants here.

In addition to the Parkinson’s Unity Walk held in April, throughout the year we held Team Parkinson events, such as Team Parkinson at the Los Angeles Marathon,  Team Parkinson 5K & Fun Run at Carnegie Center, and the Food, Wine & Maybe Tuscany.

John Ball and his amazing wife, Edna, of Team Parkinson were featured in the LA Marathon’s “35 Reasons” video series. We encourage you to watch this very inspiring video about his commitment to the Parkinson’s community and why he runs.

With your support, we have accomplished so much in 2019. We are proud to continue to honor Margaret’s legacy and push forward on the road she started some two decades ago. We wish you, your family, and friends all the best this holiday season. Dyskinesias: From The Parkinson’s Patients’ Perspective Dyskinesias are uncontrollable involuntary movements that are different from tremors. For people with Parkinson’s, it is a common experience that for some can be mild while for others can routinely negatively impact daily functions such as speech, chewing, swallowing, dressing, handwriting and other quality of life issues. The Parkinson Alliance, in its latest patient survey, addressed dyskinesias. The objectives of the survey were threefold — to learn about dyskinesias’ impact on daily function; to understand the relationship between dyskinesias, emotional well-being, and quality of life; and to provide general comments about and recommendations for treatment related to dyskinesias. The survey was taken by 935 individuals. The average age was 71, with an average disease duration of ten years.

Jeffrey Wertheimer, Ph.D., ABPP-CN, our Chief Research Consultant and Chief of Neuropsychology Services at Cedars-Sinai Medical Center, Los Angeles, California, assisted us in creating and analyzing this survey.  Examples of comments include:

“Dyskinesia makes it harder to concentrate on what needs to get done ‐‐ writing, using computer, choosing words ‐‐ it is an extra distraction especially when there are time constraints and more than one or two projects that need to be done.”

“Dyskinesia is very annoying and uncomfortable. I feel I have to explain why I am jumping all over the place to strangers. When I am home I twist until my shoes and socks come off my foot. When I lie down to rest I sometimes move so much I need to get up.”

When Margaret Tuchman began creating these surveys, her goal was to provide a way to hear and validate the voice of the person with Parkinson’s. This latest patient-centered survey, which is now complete, carries on her tradition. We invite you to download, read, and share it with your doctors and loved ones. Download the complete survey here, free of charge.

Please also consider participating in our current survey, which is on urinary symptoms and Parkinson’s. The data collection for this survey will conclude on December 1, 2019. You can take the survey online here.