Team Parkinson at the 2019 World Parkinson Congress in Kyoto 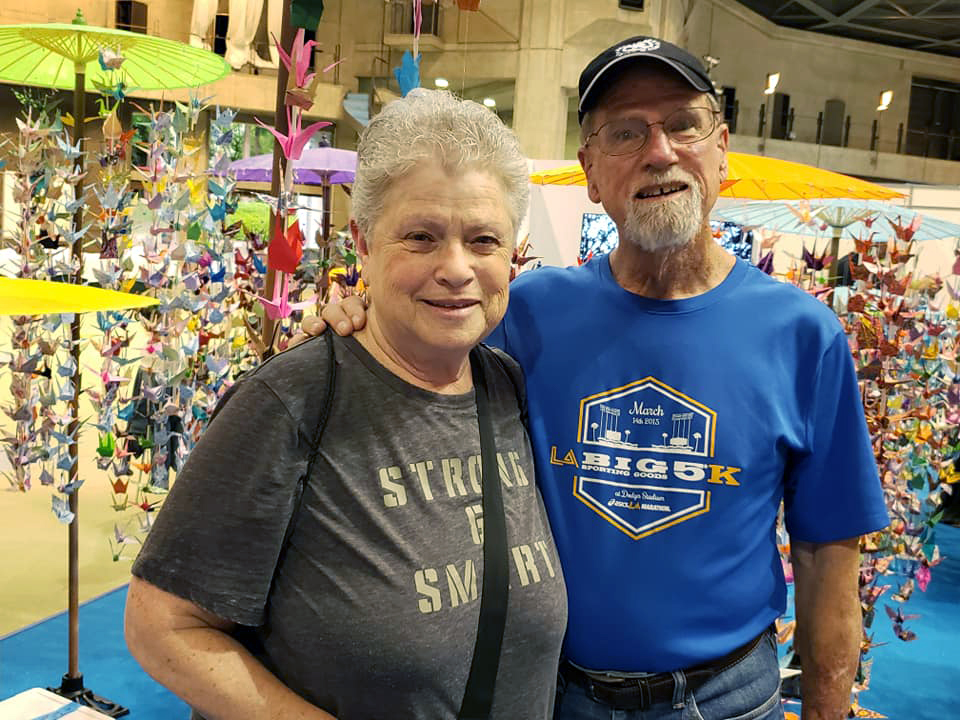 John Ball, who was diagnosed with Parkinson’s over 30 years ago, has a favorite saying: “You can’t make a difference if you don’t show up.” This year marked the fifth time that he (and the third time for his wife, Edna) showed up and represented Team Parkinson at the World Parkinson Congress (WPC), this year held in Kyoto, Japan. The conference showcases a wide spectrum of developments affecting the Parkinson’s community.

I recently talked with Edna about their experience, starting with their 12 1/2 hour flight from Los Angeles International Airport to Osaka Kansai Airport in Japan. Edna explained, “We flew Japan Airlines on the suggestion of friends who live in Osaka. Trying to figure out how to get the correct bus tickets to get to the station closest to our friends’ home was a challenge. All the ticket machines only had Japanese instructions on them. We were lost, but luckily a helpful gentleman understood what we needed and helped us buy the right tickets. Our stay in Osaka was great and our friends from Tokyo came to see us there and also to travel with us to Kyoto.”

John and Edna arrived a day early at the The International Conference Center Kyoto, host of the 5th WPC, to help with the installation and set up of the “Soaring With Hope” for PD project. “It is the brainchild of three wonderful young onset women from our support group back in California” John and Edna were two of the many volunteers who helped display some 15,000 folded cranes, from 39 countries, suspended from traditional Asian umbrellas creating a meditation garden.  Each crane carried a message of hope. The founders, Naomi Estolas, Clara Kluge and Amy Carlson, stated that in the Japanese culture, 1,000 cranes represent hope and health, which is their “tenfold wish for the Global Parkinson’s Community.”  Edna said, “The display was glorious, and we were so proud of these ladies and all the work they did, and so honored to be able to help.” 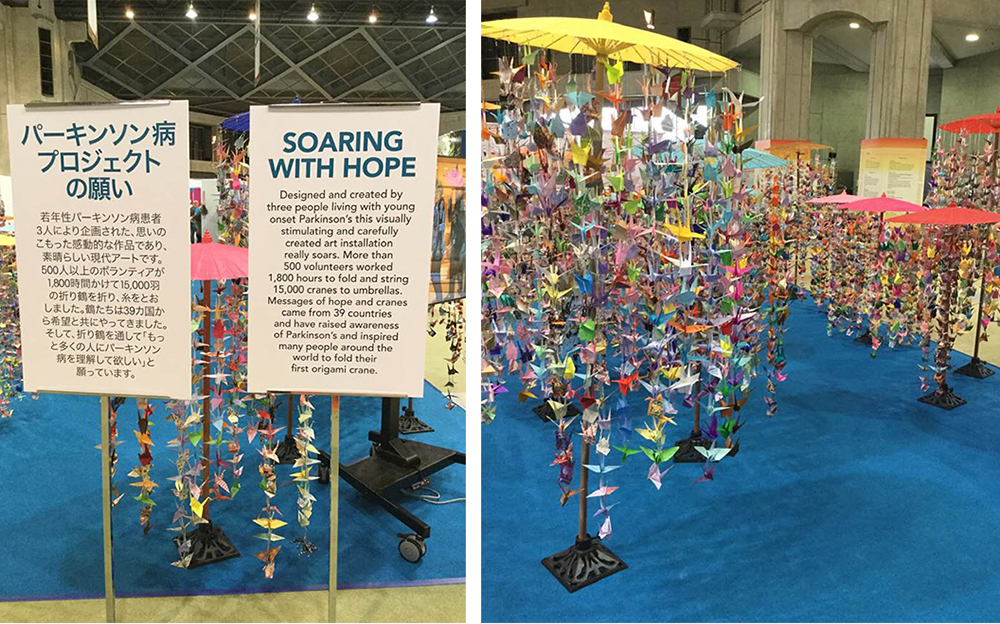 Soaring With Hope for PD

“The Opening Ceremonies in the evening were wonderful and included song, dance and Taiko drums. Very dramatic! The keynote speaker was Lyndsey Isaacs, widow of the late, great Tom Isaacs, who was a global force for Parkinson’s disease. Also, each morning there were special awards given to dedicated people who have contributed for years to the well-being of the Parkinson’s community. Their stories and speeches were so inspirational.

On Wednesday all the lecture sessions and so many other activities started early in the morning and went until 6:30pm. The lectures were divided by levels of scientific detail and depth, so that John could choose the more complicated topics and I could choose those I might understand more easily. I also went to a couple of care partner sessions, which to be honest, I could have led myself! Maybe next time I’ll ask to be a presenter! We learned a lot about the science of PD, alpha-synuclein, the prospects for personalized medicine in PD, nutrition, falls, the gut, medication, new treatments and procedures, and more. I even got a massage one day! There was art, the beautiful crane installation, movies, ping pong, dance, boxing, Taiko drumming, and more. John had his book on display in the Book Nook, and had time scheduled there to speak with people and answer questions. Several people ordered the book, so that was rewarding. 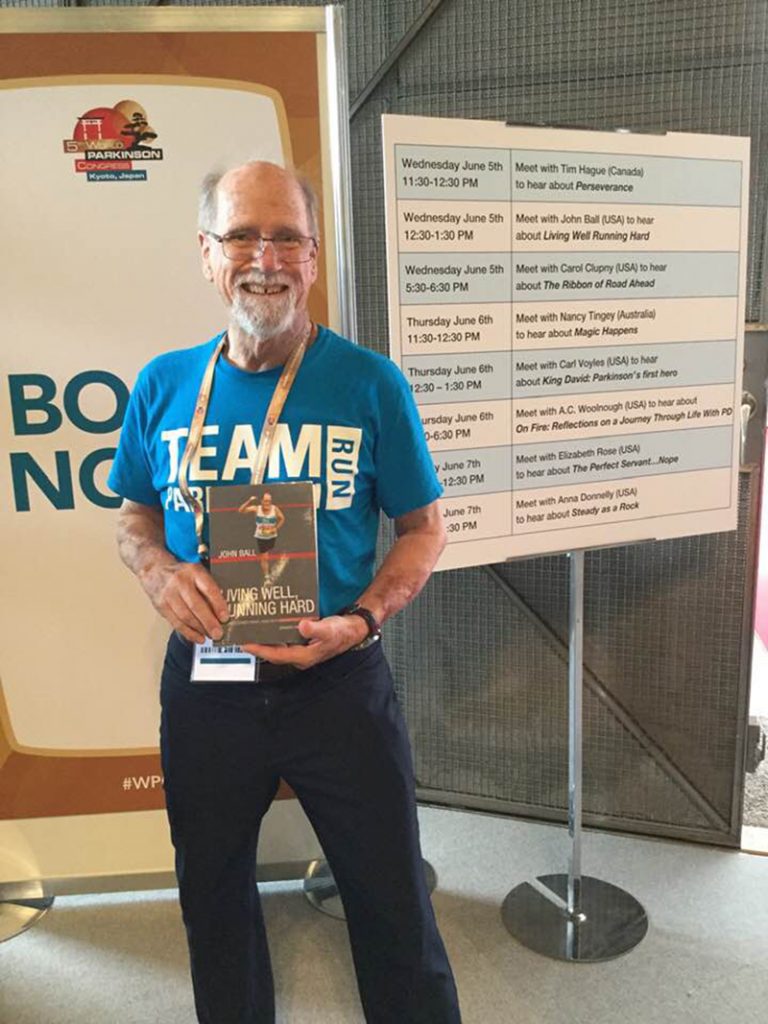 And as with each Congress, there was much anticipation on the last evening as we waited to hear where the 6th Congress would be held. We were not all disappointed to hear that in 2022 we’ll be heading to Barcelona, Spain! We hope to see many old friends there and make new ones too. We hope many of you who read this will join us for an exceptional experience of community, learning, and most of all, hope.”

We thank Edna and John for not only representing Team Parkinson in Kyoto but for continually showing up and making a difference in the PD community.

– Gloria Hansen, for The Parkinson Alliance