Recently we came across an article entitled, Israeli healer treats Parkinson’s through talk and dance.  It’s the story of how Michael Wiese, a publisher who was diagnosed with Parkinson’s, came to meet Alex Kerten, the founder and director of the Gyro-Kinetics Center in Herzliya, Israel. Wiese was so impressed with how Kerten helped him (along with thousands of others with Parkinson’s) that he told Kerten he would like to publish a book describing his technique.  Wiese introduced Kerten to David Brinn, the managing editor of The Jerusalem Post, who became the book’s co-author, and Goodbye Parkinson’s, Hello Life was born. 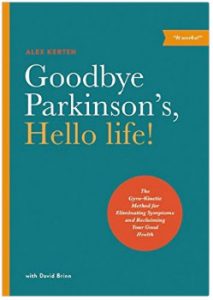 Goodbye Parkinson’s, Hello Life is a 203 page book with the goal of reducing Parkinson’s symptoms by lowering anxiety through mindfulness and creating motion in the body through music, movement, and rhythm.  Kerten explains that anxiety is often rooted long before a diagnose of Parkinson’s, and he addresses how to recognize it and change the negative scripts that might be playing in your mind.  “Our biochemistry and our psychology start to change as we learn to control our way of thinking.” Movement is through a series of exercises that focus on breathing, movement, self-massage, conducting, and improvised dancing.  By synchronizing your thoughts and actions, you can become a “Parkinson’s warrior” —  a person who is unafraid to change their story and feel good again.

Yes, it takes work to both incorporate mindfulness and exercise into your day. Yet the benefits are clearly there.  And as he points out, the book is not a replacement to your movement disorder specialist or medications.  Instead it is a complement to them. Kerten recognizes that people with Parkinson’s have good days and bad days.  He suggests that you use the book as a guide or to “take from it whatever you need to help you cope and overcome whatever difficulties you are facing on a particular day.” He concludes with “Believe in your commitment, visualize it, dream it, expect it, and bring more and more of what you want into your life.”  Become a Parkinson’s warrior.