KINGSTON, N.J. (April 12, 2022) — The Parkinson Alliance announced today that John and Edna Ball, Co-Chairs of Team Parkinson since 1999, have decided to retire effective after the 2022 Los Angeles Marathon and LA Big 5K campaign. Join us in congratulating, honoring, and thanking John and Edna Ball for over 20 years of service to the Parkinson’s disease community.

In his message to our community, John wrote that “I believe the world has changed because of this community right here.” While Team Parkinson has raised over $3 million in support of research since our founding, Team Parkinson’s impact is more profound and can be felt within and outside of our community, thanks to John and Edna Ball’s support. “I invite you to read more about John Ball’s reflection about this year’s race weekend and Team Parkinson and Parkinson’s disease then and now,” added Walton.

Please read below for John Ball’s recap of their last race weekend and his personal message to family, friends, and our community.

On the weekend of March 19-20, 2022, Team Parkinson participated in the LA Marathon and LA Big 5K. It was a tremendous success in every way, and it is satisfying to know we have done all that we can to serve the needs of the PD community.

The weekend started with the LA Big 5K. For most of our team, it was a challenge that tested them right to their limit. It’s a beautiful, hilly course, with an unrelenting series of climbs, but finishes with a long sweeping downhill run to the finish at Dodger Stadium. I am happy to report that all Team Parkinson team members made it across the finish line.

Here’s a picture of Ken Aidekman, a co-founder of both Team Parkinson and the Parkinson’s Unity Walk, and his daughter Andy flying over the finish line. His take-off was a little early, but the landing was spectacular. 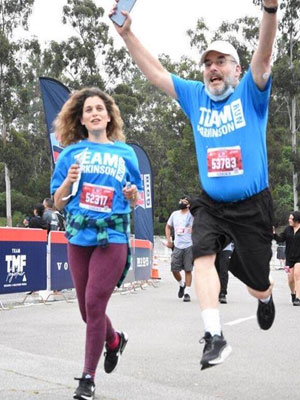 Because of concerns over COVID-19, we were unable to have our traditional Carbo-load dinner. We found a smaller venue at the beautiful home of Al and Susie Lewin. We enjoyed an informal dinner of tasty Mexican food and gave thanks to those who have supported Team Parkinson from the beginning. There was a surprise for me when I discovered that Edna had conspired to add some unexpected members to our team for the next morning. My son David and his wife Shaili, and my daughter Sarah secretly planned and plotted to run with me. It was a total surprise. I had been very uncertain in my training and was afraid that I wouldn’t be able to finish. Knowing that I’d have my kids beside me changed everything.

Unfortunately, we were unable to host everyone from the team, but here are a couple of photos of those able to attend.

The Charity Challenge 13.1 was a terrific way for Team Parkinson to close the show. At the chilly, windy hour of 7:00 AM on Sunday, Edna and Philip Bialek (our nephew) dropped the three of us (Sarah, Cynthia and me) off at Dodger Stadium and planned to recover us at the finish. At 7:30, the eleven members of Team Parkinson, including Mark Saxonberg, Doug and Mimi MacGlashan, Tracy Wong. Eddie Estrada, Alan Liu, Frank Markowitz, David and Shaili Ball, Sarah Ball, and my niece Cynthia Bialek, gathered with me for the start of my last run for Team Parkinson. At the start of the race, I was happy to see the majority of the group run off to enjoy a successful half-marathon, while David, Shaili, and Sarah stayed with me from start to finish. It was the slowest half-marathon I have ever run –slower even than my fastest marathon—but also the most rewarding. At 77 years old, living with Parkinson’s for over 50 years, I finished 2nd in my age division.  Everyone on the team finished in good health. Best of all, Edna was there to gather us all in and take us home. It doesn’t get any better than that.

To all our friends and family,

After some reflection, Edna and I have decided to retire from our Co-Chairmanship of Team Parkinson.

We have been doing this a long time.  Who could have guessed in 1999 that Team Parkinson would still be running in the LA Marathon in 2022? After all, back in the old millennium at the start of this run, we were assured by the head of the NIH that a “cure” for Parkinson’s disease (PD) was just “5 to 10 years” away.

Well, we know a lot more about Parkinson’s now, and we accept the fact that a cure for PD is a bit more than 5 to 10 years away. Even if we had a cure in-hand, it would still take 5 to 10 years to roll it out.  But that’s alright with me, because I know we at Team P did what we could with the tools at hand. We did a lot.

Team Parkinson helped define the value of exercise as a component of disease management. I am living proof that exercise is the best strategy we have for managing the impact of Parkinson’s on long-term Quality of Life. But certainly, I can’t claim this for myself alone, because it was never accomplished alone. It takes a village, they say, to raise a child. In the same way, it took a host of patients and patient advocates to raise the standard of scientific inquiry in Parkinson’s, and to prove the value of strenuous exercise to maintain physical and mental health. I believe that by putting our faces, masked by Parkinson’s (long before COVID-19 required it) in the public eye, we raised awareness and understanding. We also built a stronger working relationship between patients and the research community.  I believe the world has changed because of this community right here. We are the village that has changed the world and changed my life along with it.

Team Parkinson has also proven the value of socialization in the treatment of Parkinson’s. We have demonstrated year-after-year that getting together and working as a team has durable effects on both patients and family members.  I want to honor some of you who have demonstrated the value of friendship and support over the long-haul:

Second, my training partners, Mark, Doug, and Mimi. You are the best friends a man could wish for. You pulled me to my feet and dragged me out the door each weekend and gave me the strength and will to carry on.

Third, the most important component of this support system, my wife and family. Edna, you have been the best companion and care-partner, as well as the best wife and mother to our children, I ever could have dreamed of. You are simply the best. Getting together and staying together as a community is an asset in treating more than just Parkinson’s disease. It is an essential component of a healthy society.

Finally, Team Parkinson has demonstrated the value of goal setting in a community that has often centered its concerns on loss. It’s true that Parkinson’s takes away many capabilities and diminishes our capacity for joy but setting a goal of walking a 5K or running a marathon and achieving that goal can re-invigorate the soul. It has kept me alive and well in the 50 years I’ve lived with Parkinson’s.

Together over these last 22 years, Team Parkinson has raised more than $3 million dollars for scientific research in PD and raised awareness for many thousands of people outside the PD community.

Thanks to all of you. We did the job set before us. Because of you, I wouldn’t trade my life for anyone else’s.