The Risk of Undertaking a Clinical Trial, part two

Since writing the blog post entitled, “Jean Burns, Parkinson’s, and The Risk of Undertaking a Clinical Trial” (which you can read below), Jean started a petition.  You can find the petition here and we ask that you get involved and sign it. 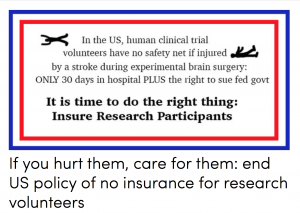 On July 19, 2016 Steve Sternberg wrote in U.S. News & World Report an article entitled, “In Research World, Long-Term Injury Care Hard to Come By, ethicists call for a national plan to care for injured research volunteers.”  We encourage everyone to read this provocative piece along with his prior article, “Undertake a Clinical Trial at Your Own Risk.”

Let us hear from you about this important topic!

Jean Burns, Parkinson’s, and The Risk of Undertaking A Clinical Trial 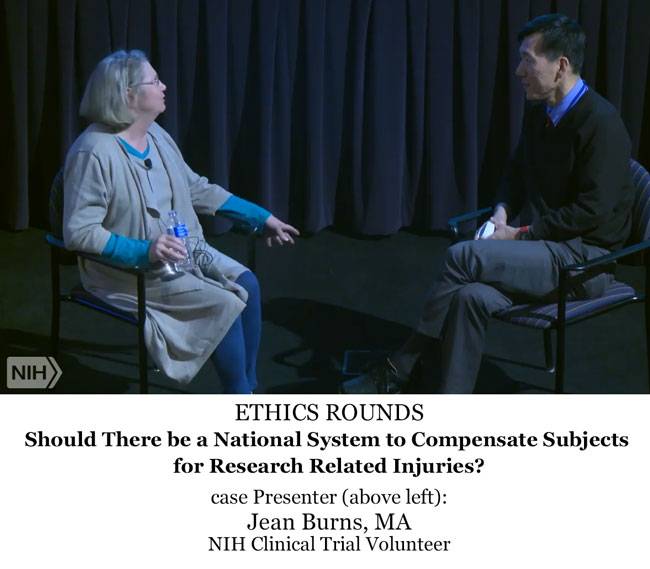 Jean Burns of Phoenix, Arizona, is a long time friend of The Parkinson Alliance.  She is a strong advocate to provide a safety net to protect participants in research who may be harmed as a result of a clinical trial.  Jean’s story started in 2003 when she was diagnosed with Parkinson’s. Being a former web developer, she immediately took to the web to learn what she could about the disease, including various trials that she could participate in.  “I joined my first clinical trial in 2003, five months after my diagnosis.”

Because she kept close tabs on the research world, and did her homework, Jean became the third person to be accepted into a National Institutes of Health clinical trial on GDNF gene therapy, a therapy that might slow the progression of the disease. This was no small undertaking.  As part of her five year commitment, she has thus far had MRI-guided brain surgery, 9 MRIs, 3 PET scans, and three lumber procedures.

The surgery, however, almost didn’t happen when Jean read about all of the things that could go wrong.  Even though only a remote possibility, some of the complications included a stroke, seizure, brain hemorrhage, even being left in a vegetative state. Because Jean is the child of a parent who had a stroke and needed long term care, she knew first hand the difficulties and expense such a complication could create.  She naively thought that if she were harmed, she would get all needed medical care from the NIH.  Then, while reading the 21-page consent form, on the last page she found her answer. “I learned I could stay at the NIH hospital for a month. After that I had the right to sue the US federal government. What a surprise! There was no long term care.”

Jean then had a decision to make.  Her health was rapidly declining, and she was afraid for her future. Although she was concerned about the possible complications, she also felt she had no other choice but to participate in the trial. She signed the content, and on March 7, 2014, she had 11 hour brain surgery to inject the experimental treatment into four areas of her brain.  She recognized that every precaution was taken and she had what she called “superb care” (although it will be years before the trial results are in).  While Jean does not regret her decision to participate in the trial, she continued to question why there is no safety net in place for trial participants. When she talked to the department about her concerns, she learned the policy has nothing to do with her doctor or his team.  Jean appealed to the ethics experts at the NIH Clinical Center where her surgery took place.  She made such a strong case and good impression that the NIH ethicists invited her to became the first ever patient-participant presenter to tell her story before the NIH Grand Rounds held in Bethesda, Maryland.  The purpose of the NIH Grand Rounds it to present an issue that raises what is believed to be important ethical issues to discuss.

On February 4, 2015, NIH ethicist David Wendel presided over the Grand Rounds topic “Should There be a National System to Compensate Subjects for Research Related Injuries?” You can watch the presentation here.  He began by stating that the issue of compensation in various situations for research related injuries has been around for a long time.  He mentioned countries, such as Uganda, Brazil, India, the Ukraine, and most of Europe has such a program in place. He stated that in 1979 the Presidential Commission for the Protection of Human Subjects of Biomedical and Behavioral Research ruled that it was a matter of justice to have some kind of compensation to protect participants of clinical trials.  “There should be the development of national pilot programs to see how we could implement, on a national level, compensation for research related injuries in the U.S.” Some 20 years later a national program was again called for, as it was in 2006, and again in 2011.  He also read what is in the policy of one institution. “We will provide acute care that you need for any medical injuries that result from this research, and we will bill you and or your insurance company for that care. University sponsors do not provide any other symptoms of compensation for research released injuries.” Today, there still is no national policy on this issue. Next he introduced Jean who was interviewed by Scott Kim, and Jean told her compelling story.

The next speaker was Ken Feinberg, an attorney and the administrator of major compensation funds, such as the September 11 Victim Compensation Fund of 2001, One Fund Boston (the compensation program following the Boston Marathon Bombings), the BP Deepwater Horizon disaster, and several others. He stated that such a fund is a “very complicated provocative topic” and that “determining eligibility for compensation is a very sophisticated difficult assignment.”  He posed many questions as way to break down the issues. Do the policy makers want such a fund? Where is the money coming from? How much money is there?  Who is eligible to receive such compensation? Is it a tort based system? A worker’s comp based system? What are the proof requirements that a victim demonstrates that the injury is a consequence of the research? How do you prove it? Is it 100% the cause? 50% the cause? 10% the cause? What are the consequences of taking the compensation? What are the due process requirements? Who is administering the program? You signed a consent form. Is a public policy encouraging these consents?    He stated, “There has to be a public policy basis, an end game, an objective when you compensation research victims.”

Jean countered Mr. Feinberg’s list of questions, believing they were a bit off topic. “I think we can all acknowledge, if I undergo brain surgery and have a stroke on the table, that was research related. If I have a hemorrhage on the table, that was research related.” Jean is looking for some type of insurance policy, a safety net. Regarding signing the consent form, she countered, “You have to acknowledge that you may be dealing with patients who are desperate for better treatments or a cure. And so sometimes this is our only recourse.” In Jean’s final point, she asked, “Do our researchers want to continue to run clinical trials and studies? Do they want to continue to have patients volunteer? Because if we’re not treated well, we may dry up.” Mr. Feinberg noted that her questions could answer public policy objectives.

Another person from the audience suggested a principled basis for compensation in the form of needed healthcare. “One could be gratitude and the other would be justice in a specific sense of making a person whole.” He gave an analogy to military service. “We can think of participants … as putting their bodies on the line. We can have a compensation that consisted in healthcare services that were needed to make them as whole as possible.”  Like with veterans, “We could do the same for those who put their bodies and sometimes their psyches on the line in serving as human research participants.”

Steve Sternberg reported on this issue last month in an article entitled, “Undertake a Clinical Trial at Your Own Risk,”  in USA News.  In it, Elizabeth Pollard, Executive Director of the World Parkinson Coalition, stated that “Without research volunteers, test of new drugs will stall. Their volunteering is a currency. They are as valuable as the investors who are financially backing the studies.”

Jean states, “The NIH actively looks for volunteers for its clinical trials and calls them “heroes.” She doesn’t understand why people are not as appalled as she is.  “It does require courage to undergo experimental brain surgery without a safety net. And while at that time I felt I had no other options and took a leap of faith, I am now taking a step back and will no longer recommend that other human beings participate in high risk clinical trials.”

We thank Jean for all that she does to bring attention to this matter. But, we want to hear from you. What do you suggest we in the Parkinson’s community do to bring about a national policy to protect research participants in clinical trials?

— Margaret Tuchman, President of The Parkinson Alliance, and her blogging partner Gloria Hansen